For venture capitalists, Newbury Street is in fashion 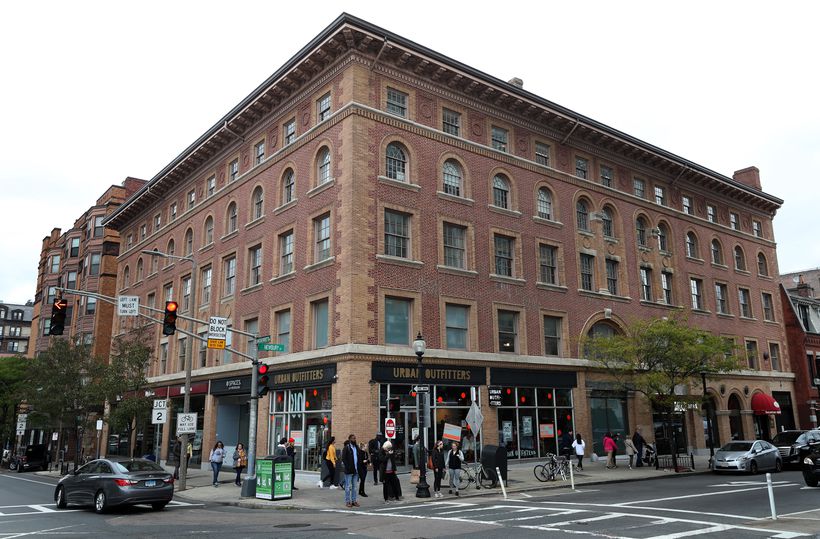 Mendoza Ventures, one of the venture capital firms that calls Newbury Street home, occupies space in the building at the corner of Newbury and Massachusetts Avenue. DAVID L. RYAN/GLOBE STAFF/GLOBE STAFF

Stroll down Newbury Street on a fall weekend and you could shop at a handful of stores that originally were funded by venture capital firms: the shoe store Allbirds, men’s clothing shop Ministry of Supply, or eyeglass retailer Warby Parker.

But less obvious is that Boston’s fashion capital has also become the latest hot spot for the region’s influential venture capital industry. A shopper could spend thousands of dollars at Newbury Street’s high-end shops, while an entrepreneur could raise millions from the venture firms in the office spaces above the stores.

Originally, Boston’s venture capital sector was downtown, with the banks and mutual fund companies. Then, Waltham became the place to be, with so many firms clustering in the office complexes on a hill above the Cambridge Reservoir that it was dubbed Mount Money.

But a decade ago, a younger generation of entrepreneurs were starting and growing companies in the city, rather than the suburbs. They and their employees wanted to walk, bike, or take public transit to work. A few venture capital firms tuned into that, and returned to the city — Kendall Square in Cambridge, or back to downtown or out to the Seaport District.

But then, Kendall and the Seaport got too pricey for most startups, as bigger companies (think Google, Biogen, PriceWaterhouseCoopers, and PTC) gobbled up office space. Up-and-coming startups were finding cheaper space in Downtown Crossing, the Financial District, and the Back Bay. At one time, I found it odd going to the Prudential Center to visit a fast-growing e-commerce company; now that company, Wayfair, is one of the biggest office tenants in the city, and it has spread out around Copley Square.

So in 2014, when it needed to raise money, Wayfair didn’t have to go far: Newbury Street, where Spark Capital was among the first of the region’s major firms to open an office, back in 2005.

“We saw the sprawling suburban VC offices as the boneyard, and decided we needed to be in Boston,” said Spark cofounder Todd Dagres. “The tech space was changing, and the city seemed like the place to be at the time. It differentiated us from other VCs. Now, you’re different if you are in the suburbs.”

“Having worked together in Cambridge for twenty-plus years, we were looking for something nontraditional,” says chief operating officer Kevin Gillis.

Located above a Miniluxe nail salon, Third Rock is known for helping to commercialize recently discovered technologies from research hospitals and academic labs. So it doesn’t hurt to be close to Cambridge, Longwood Medical Area, and Massachusetts General Hospital.

Among the companies that Third Rock has backed are Editas Medicine, which is using gene editing to address eye diseases, and Sage Therapeutics, developing new drugs to treat depression. Both are now publicly traded. And this summer, Third Rock announced it had raised $770 million in fresh capital to invest in new health care startups.

Over the Nike Store is Flare Capital Partners, which also funds health care startups, but more on the technologies used for payments or managing patient data, rather than in new medicines.

Being able to walk to work is part of the appeal for Flare cofounder Michael Greeley, who lives on Beacon Hill. And he noted that space in most Back Bay office towers is “crazy expensive right now,” with Wayfair and other rapidly growing tenants, such as DraftKings, taking over much of the available space.

Rick Grinnell, a founder of Glasswing Ventures, observed that Kendall Square and the Seaport “have become impossible to get to, or out of, given congestion.” Plus, there’s often parking available on Newbury’s metered spots during the day, he says, for the reasonable price of $7.50 for two hours.

“Given that I used to have an office in Kendall, and then the Financial District, the number of guest complaints about visiting and parking have gone down substantially,” Grinnell said.

And with smaller buildings, it’s easy to get an entire floor and have guests come directly off the elevator into a custom-designed space, rather than a generic hallway.

Much of the office space on Newbury is being upgraded, said Wil Catlin,of Boston Realty Advisors. When I contacted him last week, Catlin said he had three tours scheduled for investment firms looking at offices on Newbury Street.

Of course, the upgraded workspaces, combined with demand from deep-pocketed tenants, means that rents are rising — from the $60 per square foot range up to $80 or $90 per square foot, Catlin said.

Three of the newest venture capital firms on Newbury are at opposite ends of the street.

Elephant Partners raised $250 million last year to invest in mobile apps, consumer-oriented websites, and software for businesses. Its library-like office is upstairs from Dolce & Gabbana, at the high-priced end of Newbury near the Public Garden. Elephant’s founders include Andrew Hunt, who previously helped start Warby Parker, located one block west of Elephant’s offices. (That block has another new arrival on Newbury: Innospark Ventures, which invests in artificial intelligence startups.)

At the Massachusetts Avenue end, above Urban Outfitters, is Mendoza Ventures, which manages a small fund of about $10 million. It invests in cybersecurity, financial tech, and artificial intelligence startups and was founded by the husband-and-wife team of Adrian and Senofer Mendoza.

Adrian Mendoza recalls his days an entrepreneur looking for money and having to drive to Waltham to meet with venture capital firms. “You had to go to the mountaintop to make your offering to the Waltham gods,” he said.

Now, Mendoza says, “the number of entrepreneurs who’ve ridden bikes to meet us feels like it is half or three-quarters of them. The whole drive-to-Waltham thing is over.”